What's the story behind ginger ale?

When you were sick growing up, what drink did your parents give you? In my family, Ginger Ale (specifically Canada Dry) was the go-to for basically any sickness. And for many other Black families, this seemed to be their drink of choice too. Just a quick scroll through #BlackTwitter will uncurl tweet upon tweet extolling the Black community’s love of this admittedly perculiar “cure”.

Yet — have you ever wondered how the connection between Ginger Ale and Black Americans came to be? And more importantly, is Ginger Ale actually helpful when sick? Luckily for you, I decided to spend Black History Month to finally answer these important questions. I may not be a historian, but equipped with the power of my alma mater’s alumni library access and loads of time, let’s get started.

To answer these important questions about Ginger Ale, I had to dig into the drink’s roots — it’s fresh ginger roots that is (🥁 ). Ginger is one of the world’s oldest-traded vegetables. Over the last several centuries, traders have moved it across the world and, most relevant for this story, across Western Africa. With ginger firmly rooting itself around the world, the vegetable became cheaper and commonplace within traditional medicine. In many West African communities, ginger was a common remedy for inflammation and upset stomachs.

Unfortunately, like most stories about “Why is X like this in America?,” here’s where we learn how slavery is likely the foundation to this story’s answer. During the era of the transatlantic slave trade, enslaved Africans forced to the Americas had non-existent to at best grotesquely inadequate health care access. In most cases, captives health care options were:

Needless to say, many enslaved people flocked to traditional medicine and roots such as ginger to treat ailments. By no means were all West African cultural remedies effective, but when put between your ancestor’s remedies and an enslaver’s quizzical live testing, those cultural treatments were the obvious best choice.

So racism was a factor as usual — how does soda play in?

Around the start of the 20th century, soda entered the cultural sphere. Originally marketed as health drinks, sodas also have a racist history, something you can read more about in Professor Grace Elizabeth Hale’s “When Jim Crow Drank Coke.”  In our case, we skip to 1907, the year John James McLaughlin, a Canadian pharmacist, patented the name Canada Dry. Unlike other ales on the market at the time, Canada Dry had a lighter ginger taste that made it more palatable. That light taste made the drink popular for both kids and also for adults who loved it as a mixer during the Prohibition era. As the prohibition raged on, the company leaned back into the initial medicinal aims of soda, focusing their positioning around the drink’s ability to alleviate stomach discomfort. 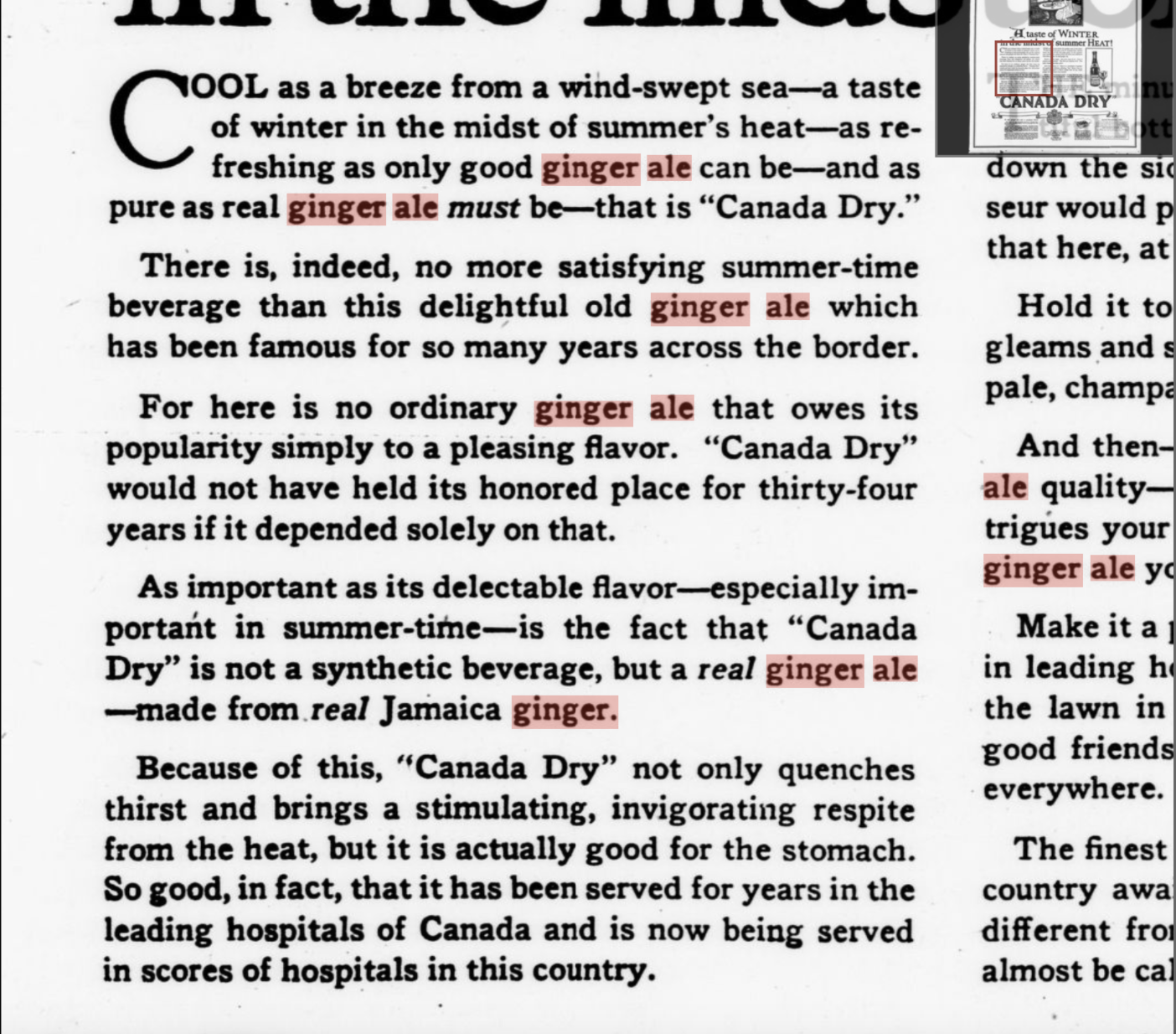 A Canada Dry ad in a July 1924 issue of the Washington DC Evening star newspaper.

As soft drink companies continued to grow, their prices not only dropped, but they began to realize the money they were missing not targeting Black communities. Canada Dry and other sods companies began to seek ad space across Black-owned newspapers across the nation as they sought new customers.

My research trail goes partially cold from here. (Author’s note: You can blame that to the plethora of academic articles and newspaper clippings locked by paywalls.) However, it leads me to my final conclusion I share withy you and what some readers may have skimmed to learn — what’s the story of Ginger Ale becoming so prominent as an elixir in Black community stereotypes?

Will’s hypothesis to the rise of ginger ale

We’ve finally made it to the end of this long story, but you might be wondering “Does Ginger Ale actually work?” Likely not with modern recipes. In fact, Canada Dry, my family’s Ginger Ale of choice, has been sued several times in recent years over their “Made by real ginger” line. In one lawsuit, the defendants noted:

“They do buy actual ginger, but then what they do is they boil it in ethanol, and that essentially destroys any nutritional or medicinal benefits,” Mark Canofari said, adding that Canada Dry uses a ginger concentrate. “One drop fills 70 cans […] and a drop is .05 ml. So that’s how little, even of the concentrate, is actually in one drink.”

In many of these cases, Canada Dry’s owners, Keurig Dr. Pepper have settled out of court and the company’s marketing has begun to shy away from its medical benefits. Based on that, my view is Ginger Ale likely may soothe an upset stomach, but it’s ginger levels are likely too low to have any meaningful health benefits outside of placebo. Nevertheless, the drink has built up a perception so great it’ll likely to maintain its pull for families looking for a quick cold remedy. As for me? I’ll likely still go for a can when I’m feeling under the weather — maybe not for the health benefits but for the childhood nostalgia it invokes every time I take a sip.